This week I have been made aware of my tendency and desire to avoid suffering. When I see a sad Facebook post, hear an angry comment or complaint, or catch the news, I cringe and turn away. Ugh. I know I shouldn't, but I do.

Unlike His creatures, Jesus walked boldly into a mass of lepers, touched the sick, healed the lame, dialogued with the demon-possessed. He brought life, hope, peace and joy. He is the Good Shepherd.

Part of our human condition is called expectation. We have an expectation, or desired outcome, for everything. We expect coffee to get us up and running, we expect a daily routine, we expect the washer and dryer to work, we expect our children to listen. But sometimes (?) God has a different plan. He sees a greater need.

This morning's devotional came from Numbers 20:1-13 where the people of Israel ran out of water in the wilderness:

“Would that we had perished when our brothers perished before the Lord! Why have you brought the assembly of the Lord into this wilderness, that we should die here, both we and our cattle? And why have you made us come up out of Egypt to bring us to this evil place? It is no place for grain or figs or vines or pomegranates, and there is no water to drink.”

And the thoughts came, "Did they really expect a place of grain, figs, vines and pomegranates? You're kidding me? Why, all of a sudden, are they prepared to die? At that point would it really matter if they had cattle or not?"

They had a need, a desperate need--but they wanted so much more. They wanted what God hadn't promised. Their imaginations had carried them where God did not intend to take them...yet.

Many of us are familiar with Philippians 4:19: "And my God will supply every need of yours according to his riches in glory in Christ Jesus." The unasked question is: how do I know my need? And the answer is: because God will supply it.

If I perceive a need that God's not meeting, there's a bigger one behind it. There's something greater, something more, something unseen that God is doing. I don't need pomegranates and vines. I need water.

Then Moses and Aaron went from the presence of the assembly to the entrance of the tent of meeting and fell on their faces. And the glory of the Lord appeared to them, and the Lord spoke to Moses, saying, “Take the staff, and assemble the congregation, you and Aaron your brother, and tell the rock before their eyes to yield its water. So you shall bring water out of the rock for them and give drink to the congregation and their cattle.” And Moses took the staff from before the Lord, as he commanded him.

God knew the need and only He could meet it. Need water? Got a rock? Really? He doesn't need a specific set of circumstances or "just the right person for the job." He really. doesn't. "need." anything. to take care of us. He does it through His riches in glory in Christ Jesus. Jesus made the way for us to interact with God, to receive grace, forgiveness, mercy, and kindness. It is only through Jesus we come to God and call Him, "Father."

And here's where I've been lately:
Then Moses and Aaron gathered the assembly together before the rock, and he said to them, “Hear now, you rebels: shall we bring water for you out of this rock?” And Moses lifted up his hand and struck the rock with his staff twice, and water came out abundantly, and the congregation drank, and their livestock. And the Lord said to Moses and Aaron, “Because you did not believe in me, to uphold me as holy in the eyes of the people of Israel, therefore you shall not bring this assembly into the land that I have given them.” 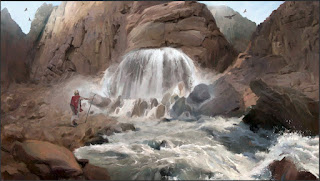 In other words, "Moses, this is not about you. It's not about your leadership, your desires, expectations, frustration, or ability. I have provided and you contaminated my grace with anger and unbelief. You took it upon yourself to communicate your displeasure by hitting the rock--twice--instead of talking to it. You wanted the people to see you bring forth water. I told you to talk to the rock. You hit it. How did you display my generosity? My gentleness? My power? My holiness? Who are you to use my goodness as a platform for your displeasure?"

These are the waters of Meribah, where the people of Israel quarreled with the Lord, and through them he showed himself holy.

In reading Facebook posts of suffering, pain, and uncertainty, I am not called to fix or change anything. But I can pray, extend grace and love. In reading the news, I have an opportunity to talk to God, to reach out as the Lord allows, to interact with a suffering world and the individuals around me. I can give to others as the Lord has given to me--no less, no more. So what kind of grace and mercy have I received from the Lord today? Have I interacted with His Word and in prayer to the point that my heart and soul are reminded of His goodness and filled with His grace? I will reach out to others with the Spirit, grace, and kindness I have received and taken for myself.

How deeply are you drinking of the rock?

Now these things took place as examples for us, that we might not desire evil as they did. Do not be idolaters as some of them were; as it is written, “The people sat down to eat and drink and rose up to play.” We must not indulge in sexual immorality as some of them did, and twenty-three thousand fell in a single day. We must not put Christ to the test, as some of them did and were destroyed by serpents, nor grumble, as some of them did and were destroyed by the Destroyer. Now these things happened to them as an example, but they were written down for our instruction, on whom the end of the ages has come. Therefore let anyone who thinks that he stands take heed lest he fall. No temptation has overtaken you that is not common to man. God is faithful, and he will not let you be tempted beyond your ability, but with the temptation he will also provide the way of escape, that you may be able to endure it. (1 Cor. 10:1-13)
at 7:08 AM

I'd love to hear from you! Please share your experiences, thoughts, questions or comments. Thanks for stopping by.