I am not a runner and I never have been. I used to tell my friends, "If you see me running, you'd better run, too, 'cause very wrong."

The last few years, I've been inspired to at least exercise--and I've tried to learn how to run: Couch to 5K (tried and failed),  online fitness programs, books on body stewardship and exercise basics. I've tried. So far, practice hasn't made (anything) perfect. 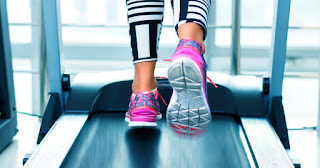 Once, in the fitness room of a hotel, I struck up a conversation with a young girl. "Never give up," I puffed. "When you feel like giving up, remember this old lady on the treadmill and keep trying."

That scene sums up life. We look to and are encouraged by those ahead of us who don't give up. When we don't see spiritual growth the way we'd like, we keep trying. When others outshine us in performance or excellence, we keep going. When life isn't all we thought it would be, we press on. Why? Not because practice makes perfect, but because practice equals faithfulness and faithfulness represents our God and Father.

God is faithful to us. He sent Jesus. Jesus, who faithfully completed the work of the Father and continues to intercede for us. God the Father, through Christ, works faithfulness in our lives by His Spirit and through His Word. Because of God's faithfulness, we, too, can be faithful. He never gives up!

Even knowing we will never be perfect here on earth, we can strive for daily fellowship with God, examine our hearts and lives, intercede for others, serve selflessly, give generously, live righteously. Our efforts are not dependent on our will power, self-effort or sufficiency, but "our sufficiency is from God, who also made us sufficient as ministers of the new covenant, not of the letter but of the Spirit; for the letter kills, but the Spirit gives life." (2 Corinthians 3:5-6)

In a practical, personal way, I may have found something that works. I'm still trying. Maybe "None to Run" for those over in weight and old in age will push me over the edge. There's always hope... And, whether or not I succeed in running a 5K before retirement, I have confidence that God is building my character, directing my steps and preparing me for an eternity of blessing.

Therefore, having been justified by faith, we have peace with God through our Lord Jesus Christ, through whom also we have obtained our introduction by faith into this grace in which we stand; and we exult in hope of the glory of God. And not only this, but we also exult in our tribulations, knowing that tribulation brings about perseverance; and perseverance, proven character; and proven character, hope; and hope does not disappoint, because the love of God has been poured out within our hearts through the Holy Spirit who was given to us. (Romans 5:1-5)
at 2:00 PM No comments:

Hope and Our Final Destination

I was quite grumpy the other day. Due to house construction, we've been without air-conditioning on humid days, without water, sewer, lights, power--coming and going--and I was absolutely tired of the inconvenience.

The new project is coming along lovely, and it's very exciting. It's fun to imagine what it will be like to have a real kitchen again, laundry, and additional bathroom space. But until then, each day is an adventure. 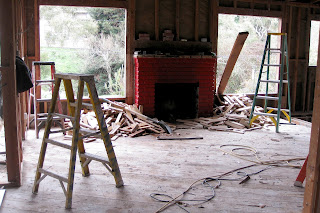 And that's when I thought about Heaven. Life here on earth is difficult, unpredictable, wearying.But for those who have placed our faith in Jesus, it's only temporary. We can see glimpses of what's coming. We can anticipate with joy and excitement. We can look forward to life in a perfect world with our perfect Father--and that gives us hope, joy, endurance, and purpose.

Next I thought of our teen helper, Dan. Dan works by the sweat of his brow alongside us, pulling electrical wire, picking up trash, reworking landscaping. He puts in long hours, but he does not have the same hope we do. He will not enjoy the blessings and benefits of our new home. He's working, but he's not part of our family. Instead, he receives a wage. If Dan wanted to live here, he would have to leave his own family--that's pretty drastic for simply living in a different house. But if Dan's faced destruction, pain and suffering in his current home, if we were seeking his best and could promise perfect acceptance, approval, love, and a future, it would be crazy not to.

In the same way, anyone who works for God expecting a wage will miss the prize. The wage is very different than being part of the family. Only those who are part of God's family will spend eternity with Him and one another. And the only way to be part of His family is to receive Jesus as one's Savior from sin. It is only by turning my back on a sinful, destructive heritage and choosing God's that I enter His family by faith.

A person can believe a lot of things and not belong to God. For example, I can believe that


and not be a Christian. Each statement is true--and many believe them. But (give me a minute) Satan believes them, too. Look again:

The difference between Satan and God's children is personal belief and submission to these truths. Have you, personally, by choice, placed your trust in Jesus Christ alone as payment for your sin? Anytime we believe salvation is a matter of Jesus and church attendance, Jesus and baptism, Jesus and sacraments, Jesus and good works--we're still working. We must practice--remind ourselves--to let go of our perceived contribution to salvation. It doesn't work that way. You and I have nothing to bring except our sin. God provides faith. God removes sin. God imputes righteousness. And by faith, we become members of His family and joint heirs with Christ. We have a hope and future worth living for...and dying for.

For if Abraham was justified by works, he has something to boast about, but not before God. For what does the Scripture say? “Abraham believed God, and it was credited to him as righteousness.”  Now to the one who works, his wage is not credited as a favor, but as what is due. But to the one who does not work, but believes in Him who justifies the ungodly, his faith is credited as righteousness, just as David also speaks of the blessing on the man to whom God credits righteousness apart from works:

“Blessed are those whose lawless deeds have been forgiven,
And whose sins have been covered.
“Blessed is the man whose sin the Lord will not take into account.”

For the promise to Abraham or to his descendants that he would be heir of the world was not through the Law, but through the righteousness of faith.

Now not for his sake only was it written that it was credited to him, but for our sake also, to whom it will be credited, as those who believe in Him who raised Jesus our Lord from the dead, He who was delivered over because of our transgressions, and was raised because of our justification. (Romans 4:2-8, 13, 23-24)